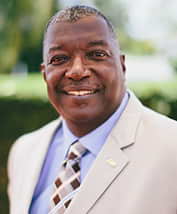 Doug Moore is the Executive Director of the United Domestic Workers of America (UDW/AFSCME 3930) which represents over 100,000 in-home care providers across California. He also serves as International Vice President of AFSCME, helping to coordinate the International Union’s actions on major national issues such as privatization, fair taxes, and health care.

Born in Long Beach and raised in Compton, California, Moore began his labor career in 1980 with the Communication Workers of America (CWA) while working for phone company GTE. He became a CWA shop steward with a knack for internal organizing and eventually became president of CWA Local 9586 in Santa Fe Springs, CA. He subsequently worked for SEIU as an international representative before becoming Ohio State Director for the national AFL-CIO, where he was responsible for AFL-CIO programs for more than one million members.

After being recruited by AFSCME and serving as Regional Field Administrator and Assistant Regional Director, Doug assisted in negotiating an agreement and helped build a 20,000-strong, member-driven union – AFSCME Local 3299. He also created the first statewide Executive Board structure and developed a strong member activist program for the new local.

In 2005, Moore was appointed Deputy Administrator of UDW, tasked with restructuring the union, a successful tenure which led the UDW Executive Board to appoint Doug Moore in February 2008 as Executive Director, with full responsibility for managing UDW activities, budget and staff.

In his acceptance speech to the UDW Executive Board, Doug said: “From county board to county board, we will send a clear message that homecare providers matter. We demand to be treated with dignity and respect! We are not second-class citizens and we will fight to end the classism, sexism and racism that we see every day from those elected board in our counties… We will do this the old-fashioned way: Organize, organize, and organize! Because when we fight, we win!”

Thanks to Moore’s vision of social justice, strong political and legislative advocacy, aggressive and innovative organizing campaigns, and helping members grow and succeed in their own lives and communities, UDW has grown to become the largest AFSCME local in California.

In 2009 he was selected as Labor Leader of the Year by the San Diego/Imperial Counties Labor Council. In selecting Moore for its top award, the Labor Council made particular note of his efforts to reach out to and engage hundreds of diverse community leaders and groups throughout San Diego County. “He has created bridges to community partners for the entire labor movement, providing a conduit for organizing and political success,” they said.

In 2010, Moore was one of the key labor leaders in the historic “March for California’s Future,” a 48-day, 350-mile march from Bakersfield to the State Capitol in Sacramento designed to show public support for quality public education and public service for every Californian, a government and economy that serves all citizens, and a fair tax system to fund California’s future. He also led the campaign to place term limits on the San Diego County Board of Supervisors, a ballot measure that passed with over 70% approval by voters.

Moore has long recognized the importance of viewing the labor movement as a part of a broader movement for social change and economic justice. In 2014, he traveled to Ferguson, Missouri to march with the community and stand up against racism and oppression in the wake of Mike Brown’s death. He also urged the labor community to do the same, saying, “In this moment we must decide whether we’ll watch from a distance and make an official statement, or get on the ground and get to work. None of us can afford to sit this one out.”

When Moore was honored by the Orange County Labor Federation as Labor Leader of the Year in 2015, he urged his fellow labor leaders to get involved in the broader social justice movement. “We need to band together with others in our community who are facing similar injustices – income inequality and attacks on fundamental rights and dignity…No one is equal until we are all equal.”

In April 2018, Moore took part in I AM 2018, a commemoration of the 1968 Memphis Sanitation Workers’ strike. Speaking from the same building where Dr. Martin Luther King, Jr. gave his legendary “Mountaintop” speech exactly 50 years to the day earlier, Moore again challenged labor leaders to recognize the intersectionality of oppressions and work together for racial, economic and social justice, saying, “Intersectionality drives everything we do. To win for our members, we must lift them up in every way that society is trying to keep them down.”